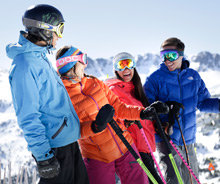 Grandvalira in Andorra is the name for the ski area stretching from Pas de la Casa on the French border to Encamp, including Grau Roig, Soldeu, El Tarter, and Canillo along the way, which are all marked on the Grandvalira piste map. The area was created during the 2003-04 season when the neighbouring sectors of Pas de la Casa -Grau Roig and Soldeu-El Tarter merged together creating one huge domain with six different sectors. The whole Grandvalira ski resort is linked and covered by one lift pass, thus giving visitors the chance to experience a great choice of snowboarding and skiing.

In 2011 and again in 2012 the area further expanded slightly, so now with 210 kilometres of pistes, the Grandvalira area is fantastic for skiers & snowboarders of any ability. Each of the sectors has its own school, but to find out more about Pas de la Casa ski school visit our guide where you can also book group lessons.

Experience an unforgettable night on the slopes by making a reservation at the magical ice hotel located at the top of Grau Roig.

If it's your first time coming to the mountains you should visit our 'What to Wear' guide to get an idea of things to pack!

The Sunset Park Peretol is the only floodlit night time snowpark in the Pyrenees. It is open from Tuesday to Sunday at 17:00 - 21:00, with floodlights and music to create a fantastic atmosphere, it's the latest addition to Grandvalira's freestyle area.

All you need is your Grandvalira lift pass, and you'll find the park in the Peretol area just between Grau Roig and Soldeu near Bordes d'Envalira. If you don't have your own transport you can take the service bus from next to the church.

Keep up to date with the latest news, offers and upcoming events!